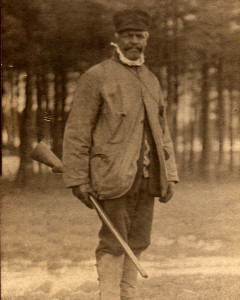 Allen Hinton (1844-1912) was born in Oxford, North Carolina, reportedly one of fifteen children to slaves Anthony and Rosetta. He was sold, probably around 1857 when he was thirteen years old, to William Ruffin Cox, an attorney who settled that year on a plantation located in nearby Edgecombe County. When war came, Cox became a high ranking officer – eventually a Brigadier General –in Robert E. Lee’s Army of Northern Virginia, and while serving in “Ramseur’s Brigade,” directly opposed the 1st Massachusetts Heavy Artillery and Andover’s Company H at the Battle of Spotsylvania in May 1864.

Hinton had, in the meantime, freed himself from slavery. He came to Andover in October 1864 in company with returning Andover soldier Samuel F. Tucker. He worked as a waiter for Andover Theological students at Stowe House, which had been by then vacated by Calvin and Harriet Beecher Stowe. In 1867, he married Mary Jane (Patmore) Johnson, a widow with a young son who worked in Andover as a cook and laundress. Together, the couple began to sell snacks to the Phillips Academy students and in 1874 moved to a large rental house with a barn. In 1876, they began making ice cream, which Allen Hinton peddled first from a wagon custom-built for the purpose by Andover ‘s William Poor, and then from a “pavilion” on the grounds of the family’s farm. Hinton’s ice cream business thrived, allowing him to purchase the farm in 1901 and to rebuild the house (now 104 Hidden Road) in 1905.

In 1889, Hinton’s lovely and accomplished daughter Alice wrote to William Ruffin Cox, then a U.S. Senator from North Carolina, enclosing an announcement of her graduation from the Punchard Free School. She received, in return, a cordial letter from Cox that is now in the collection of the Andover Historical Society.