“By no death has the country sustained a greater loss.” 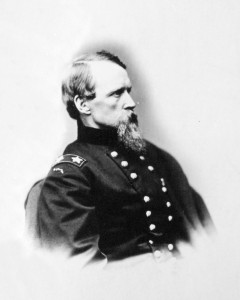 David Bell Birney attended Phillips Academy and graduated in 1839. Despite not having any military education, training or experience, by the end of the Civil War, Birney was considered one of the finest Union Generals who had served in the war.

He grew up as the son of James B. Birney, a slave owning southerner who moved north with his slaves; subsequently freed them; became one of the nation’s most outspoken abolitionists and ran for President as a candidate on the 1844 Liberty Party ticket. The conversion of his father from a Southern slave owner to an abolitionist and Presidential Candidate was the direct result of the influence of famous abolitionist leader Theodore Dwight Weld, who also is credited with converting Harriet Beecher Stowe to abolitionism. From a relatively young age growing up in Kentucky in a slave-owning family to the time he graduated from Phillips Academy, David Bell Birney had seen slavery first-hand and then had been exposed to and influenced by some of the leading abolitionist thinkers of his day.

And yet, the transformation of David Bell Birney as a citizen to a soldier may have been more striking. After graduating from Phillips Academy, Birney entered business, ultimately moved to Philadelphia and practiced law – the whole time supporting abolitionist efforts. Shortly after the outbreak of war, Birney volunteered and received an officer’s commission from Pennsylvania Governor Andrew Gregg Curtain. Despite no military training whatsoever and somewhat in spite of his abolitionist beliefs and the fact that he was a “political general” – all factors which were frowned upon in the West Point dominated Army of the Potomac – superior officers promoted Birney early and often for his skill in battle eventually promoting him to the rank of Major General and command of a United States Army Corps.

Despite having his reputation tarnished by West Point Generals and General McClellan supporters during the war, Birney now is seen as one of the most skilled Union Generals of the Civil War. According to historian Gordon C. Rhea, Birney “was unquestionably among the army’s best” division commanders; “amassed a combat record rivaling any in the army;” and “spoke his mind fearlessly” (The Battle of the Wilderness, May 5–6, 1864, Gordon C. Rhea (LSU Press, 1994), pp. 38, 202).

Praise of Birney by his commanding officers was no less impressive, his commander earlier in the war, General Phillip Kearney, wrote that Birney “displayed coolness and courage … his genius of command was especially conspicuous.” General Joseph Hooker, his commander at Chancellorsville (where Birney’s Division helped hold off Stonewall Jackson’s Corps) wrote: “I know of no better division commander in this army or one that I would rather have in my command.” No greater compliment was paid General Birney than when overall U.S. Army Commander Ulysses S. Grant picked him in 1864 to succeed General Winfield Scott Hancock as a Corps commander and then appointed him as a full Corps commander to bolster the Army of the James.

Sadly, after having reached this pinnacle in his military career and despite having served in over forty (40) Civil War battles in three and one-half (3 ½) years , General David B. Birney – the Civil War epitome of the “Citizen Soldier” – died in October 1864 in his home from disease he had contracted in Virginia. His funeral was attended by over five thousand (5,000) mourners and Orders of the Day praising his character and service were issued in both the Army of the Potomac and the Army of the James, the most notable being penned by the infamous General Benjamin Butler:

“Almost every battlefield on which the Army of the Potomac has fought has witnessed his valor. Rising rapidly in his profession, no more deserved appointment had been made by the President than General Birney’s assignment to the command of the Tenth Army Corps. The respect and love of the soldiers of his own corps has been shown by the manner in which they followed him. The Patriot – the Hero – the Soldier. By no death has the country sustained a greater loss. Although not bred to arms, he has shown every soldierly quality, and illustrated that profession of his love and choice ….. Amid the din of arms, and upon the eve of battle, it is fit that we, his comrades, should pause a moment to draw from the example of his life and the lesson it teaches.”