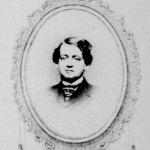 Henry S. Robinson (1831-1912) was a native of Meredith, NH who spent the first part of his professional life as a steam engineer in Maine and Massachusetts. He was a thirty-year-old married father of three and a resident of Clinton, Mass in September 1861, when he was commissioned as an officer in the U.S. Navy. He spent part of his eight-month Navy stint on the U.S.S. Flag, patrolling the South Carolina coast and was mustered out in May 1862. In September 1862, he was commissioned as a Second Lieutenant in Company G of the Massachusetts 36th Infantry. He served in Maryland, and at the Battle of Fredericksburg in December 1862 before the regiment moved west to Kentucky, Ohio, and Vicksburg, Mississippi. Robinson was severely wounded at Blue Springs, Tennessee in October 1863. After the war, he worked as an engineer for the Pacific Mills in Lawrence and then in 1873 founded the Robinson Boiler Works in East Boston. At the age of sixty-three in 1894, he married teacher Julia Underhill. The couple rented 97 Main Street, now the home of the Andover Historical Society, from the time of their marriage until 1907, when they purchased the property.

His diary, now in the collection of Andover Historical Society, begins in May 1862 and concludes in 1864.  We are especially grateful to the Advanced Placement U.S. History students who have been transcribing the diary entries since 2013. Additional thanks to volunteer Rory O’Brien for formatting and adding the files to this website.

Corrections and updates may be sent to info@andoverhistorical.org.

8th Feb. On the Potomac The “Wilson Small” was loaded [ ] deeply there was considerable [ ] in the river, floating – not quite so much however as yesterday, the trees were bare so had good view of Mt. Vernon Fort Washtn. has 40 or 50 barbette guns, left Washtn. at 8am and at … END_OF_DOCUMENT_TOKEN_TO_BE_REPLACED

Chesapeake Bay 12th Feb. On board Str. S. America see a mile or more. Came to anchor in the Roads after dark ­– 13th Got underway about 9 AM steamed(?) around nearly to the landing in front of the Fort. passed, near the [R… ], + [ ] Point, passed the Firegate(?) Minnesota which hailed … END_OF_DOCUMENT_TOKEN_TO_BE_REPLACED

19th Decem. Opp. Fredbg. Formed line at 9 AM, (cold morning) + marched down to Washington place- left part of Reg. there, on 60 with all the left wing were frosted as reserve a half a mile on lefts behind the 11 gum battery of 20 + 30 lb. rifles. The 30lbs. are said to be … END_OF_DOCUMENT_TOKEN_TO_BE_REPLACED

23rd Dec. App. Fredbg. (Dee?) to the Engs.  acct. the Pontoon train was all here by the 23rd of Nov. 340 boats in all. The bridge at (Boston?) was thrown across in a day (63 boats) – remained till ordered here– Came from Wash. on land to (Oecognan?) then to mind, it was launched … END_OF_DOCUMENT_TOKEN_TO_BE_REPLACED

1st Jan. 1863 – Happy new year to all – warm pleasant weather President Proclamation freedoms of rebels. Read letter from B.R.S. 2nd warm + pleasant Took a walk around the camp of 1st Div. + find our houses as good as any + better than most Sent #21st  Mary – also letter to S.S. After … END_OF_DOCUMENT_TOKEN_TO_BE_REPLACED