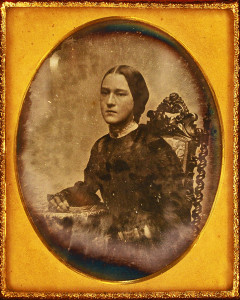 Helen Gavin (Smith) Coburn (1835-1905) was the daughter of Andover industrialist and philanthropist John Smith and his wife Agnes Ferguson. She was married to wool merchant George W. Coburn in 1859. The childless couple lived in several Boston locations, including a Back Bay mansion at 173 Marlborough Street, and summered in Andover at 47 Central Street. Her husband was a trustee of Abbott Academy and also, as a mark of his personal attention to the school, purchased for it an extensive seashell collection. George Coburn died in 1890. After Mrs. Coburn’s death fifteen years later, she left about half of her million-dollar estate to a number of charities. Her local beneficiaries included Abbott and Phillips Academies, the Free Christian Church, the Memorial Hall Library, the Andover Home for the Aged and the Lawrence city Hospital. She also left large legacies to the Massachusetts General Hospital, the Tuskegee Institute in Alabama and to the non-segregated, co-educational Oberlin and Berea Colleges.