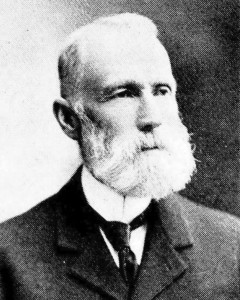 E. Kendall Jenkins (1831-1925) left with the Andover Company in July 1861 as a twenty-nine-year-old private, but was promoted in March 1862 to Quarter-Master-Sergeant, a position of great respect within the 1st Regiment of Heavy Artillery. Like the rest of Co. H, he spent the first two and a half years of his enlistment on garrison duty, manning the forts that protected the city of Washington, DC, and saw his first action in May 1863 at the Battle of Spotsylvania. He was hit twice on May 19 at Harris Farm, but not badly wounded enough to require hospitalization. On June 16 at Bryant’s Farm near Petersburg, he was more severely wounded in the shoulder. He was discharged on July 8, 1864 by expiration of his three-year enlistment. After Kendall’s return to Andover, his older brother John B. Jenkins joined up for the last year of hostilities.

After the war, Jenkins married Nancy Jenkins (his second cousin, once removed) and lived on School Street at the corner of Locke Street. He served as Town Clerk, Treasurer, Tax Collector, and was elected Deputy Sheriff. He gave up these positions to become Treasurer of Essex County, a position he held for twenty-six years. During this time, he was also Justice of the Peace, clerk of South Church, and a trustee of Memorial Hall Library. Throughout his life, he was a leader of Andover’s veterans’ organizations and activities.