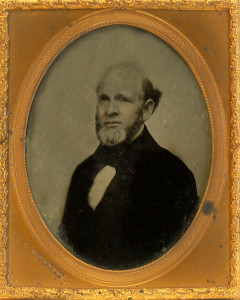 J. Thomson Abbot (1809-1870) was one of Andover’s pioneer grocers.  He was a partner in, first, Higgins & Abbott that opened in 1838 in rented basement rooms under the Baptist Church on Essex Street.  In 1859, the store became T.A. Holt and Co., when Abbott took his longtime clerk T.A. Holt into partnership.  Abbott retired in 1865, and died five years later. He was buried in the South Church Cemetery