“I knew him and I may even say I knew him well; yet …. I had not known the governing motive of his soul. I had admired him as a hero … I learned to revere him as a saint.” 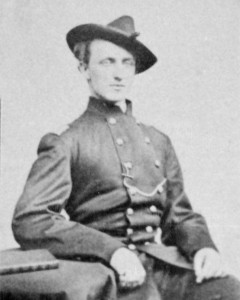 Commemorating this Haverhill native and Phillips Academy graduate merely by reciting his war exploits does a great disservice to the life of William Francis Bartlett. It is equally insufficient to honor Bartlett by noting that two of the greatest American writers, John Greenleaf Whittier and Herman Melville, wrote poems about him. It is equally inadequate to mention that a monument to him sits prominently in the State House in Boston. To place the sacrifice and ideals of William F. Bartlett into proper perspective, one must understand that a nation – both north and south – mourned the death of this man.

William Francis Bartlett enlisted at the age of 21 shortly after the war’s outbreak and was discharged from service at war’s end when only 25. In the intervening 4 years, Bartlett lost a leg in 1862, was disabled in the right arm in 1863, suffered a head injury in 1864, and was finally taken prisoner at the Battle of the Crater when his wooden leg was smashed to pieces. When the Civil War ended, Bartlett was attempting to return to action a 4th time. Promoted to the rank of Brigadier General at the age of 24, Bartlett remains one of the youngest ever to attain such rank in the history of the U.S. Army. Despite such a military record, Bartlett’s pleas for reconciliation and peace after the Civil War set him apart from the men of his times. His pleas for an end to sectional disunity during Reconstruction made him a national figure. In one speech, while dedicating Harvard’s Memorial Hall, Bartlett spoke as follows:

“The day is not without sadness as we read the beloved names on those marble tablets; and yet … their fame is secure, immutable, immortal We shall grow old and wear out, but they will always keep for us their glorious, spotless youth. I firmly believe that when the gallant men of Lee’s army surrendered at Appomattox … they followed the example of their heroic chief, and, with their arms, laid down forever their disloyalty to the Union. Take care, then, lest you repel by injustice or suspicion, or even by indifference, the returning love of men who now speak with pride of that flag as “our flag.” Our brothers fell, not that New England might prosper, nor that the West might thrive; they died for their country – for the South, no less than for the North. And the Southern youth, in the days to come, will see this, and as he stands in these hallowed halls and reads those names, realizing the grandeur and power of a country which, thanks to them, is still his, will exclaim, “These men fought for my salvation as well as for their own. They died to preserve not merely the unity of a nation, but the destinies of a continent.”

Two years after this speech, William Francis Bartlett died at age of 36. Like so many Civil War veterans, Bartlett’s war wounds proved to be too much and eventually took his life. Herman Melville wrote this poem about him:

He rides at their head;

A crutch by his saddle just slants in view,

One slung arm is in splints, you see,

Yet he guides his strong steed—how coldly too.

He brings his regiment home—

Not as they filed two years before,

By the surf’s loud roar,

Their mates dragged back and seen no more—

Again and again breast the surge,

And at last crawl, spent, to shore.

A still rigidity and pale—

An Indian aloofness lones his brow;

He has lived a thousand years

Compressed in battle’s pains and prayers,

There are welcoming shouts, and flags;

Old men off hat to the Boy,

Wreaths from gay balconies fall at his feet,

But to him—there comes alloy.

It is not that a leg is lost,

It is not that an arm is maimed,

It is not that the fever has racked—

Self he has long disclaimed.

But all through the Seven Days’ Fight,

And deep in the Wilderness grim,

And in the field-hospital tent,

And Petersburg crater, and dim

Lean brooding in Libby, there came—

Ah heaven!—what truth to him.