“He is the Navy Department.” – Abraham Lincoln 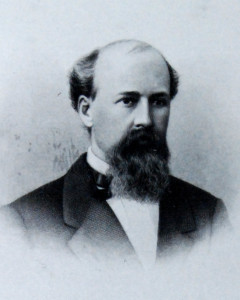 A member of the Phillips Academy Class of 1835, Gustavus Fox played a key role at the beginning of the Civil War and thereafter served as Assistant Secretary of the Navy and confidante of Abraham Lincoln.

In the closing days of President James Buchanan’s administration in 1860, the re-supply of Fort Sumter had reached a crisis. Fox had proposed a naval expedition to relieve the Fort, but his plan was rejected by President Buchanan. However, on April 4, 1861 Abraham Lincoln approved Fox’ plan, but gave orders to bring food and supplies only. On April 6, Lincoln notified the Governor of South Carolina as follows: “An attempt will be made to supply Fort Sumter with provisions only, and that if such attempt be not resisted, no effort to throw in men, arms, or ammunition will be made without further notice, [except] in case of an attack on the fort.”

After some delay caused by members of Lincoln’s cabinet, Gustavus Fox and a fleet he commanded sailed for Fort Sumter on April 9, 1861. His expedition also was further delayed by a significant storm. Knowing the re-supply expedition would soon be approaching, Jefferson Davis ordered Confederate General Pierre Beauregard to demand the surrender of Fort Sumter. After being informed that Fort Sumter would surrender on April 15 unless re-supplied, General Beauregard gave the order to fire upon Fort Sumter on April 12, 1861. When the cannonade began, Gustavus Fox was just 10 miles away at sea. Thus, the Civil War began.

Several months later, President Lincoln appointed Fox as the Assistant Secretary of the Navy, a position which was created for him. Fox was known to have an “encyclopedic” knowledge of the navy which undoubtedly assisted his advancement. In this role, Fox enjoyed Lincoln’s confidence, and the two consulted often both at the White House and at the Navy Department where Lincoln was a frequent visitor. Fox also was known to host fashionable dinners and frequently had Mr. and Mrs. Lincoln and members of Lincoln’s cabinet to his house as guests. A significant proponent for creating an ironclad fleet, Fox proved instrumental in the construction of the famous ironclad “The Monitor;” proposed Admiral David Farragut to lead the New Orleans expedition; and was known for his prodigious work ethic and skillful administration, causing Lincoln to one proclaim about Gustavus Fox: “He is the Navy Department.”

After the War, Fox worked for the Middlesex Company and lived in Lowell. He died in 1883 only one year after he had written an article which theorized that the first land Columbus had reached in North America was in the Bahamas. Fox’ article received scant attention until National Geographic concluded over 100 years later that Fox likely had been correct.