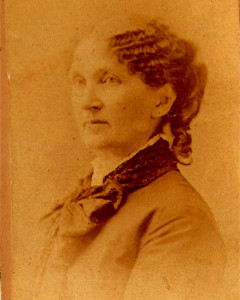 In December 1861, Emily (Fiske) Brown was one of the Andover ladies who organized the shipment of an elaborate Christmas dinner for the boys of the Andover Company. Donations of uncooked turkeys and chickens were collected at her husband J.J. Brown’s drug store on Main Street and then cooked at Town Hall at the very last minute. The roasted poultry, along with cakes, pies, pickles and preserves, dried fruit and nuts, were packed into four large crates and shipped via railroad to Fort Albany, Virginia. The Andover Advertiser printed a letter of thanks from Company H’s Captain Horace Holt: “I am sure could they have looked in upon us at about one o’clock on Christmas day, they would have been well paid; for a happier gathering I have never witnessed.” He described their day and the company they received and concluded, “Everything passed off most happily; but we did not finish the destruction among the poultry until the next day. I will close by expressing the hope that all Andover enjoyed a Christmas as “Merry” as did the Andover Company.”

Besides her nineteen year old soldier son George, Mrs. Brown had six children at home in 1861. Her last child, daughter Fannie was born in 1863. She was born in 1820 in New Orleans, where her father, Ebenezer Fiske, had been a prominent merchant. She died in 1908 at her daughter Fannie’s home in Hyde Park, Mass.