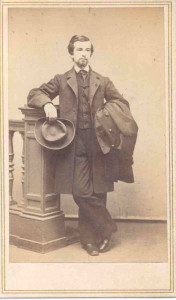 Henry S. Jenkins (1837-1912) of Boston worked a clerk and a painter before the War, perhaps with his father and uncle in the city’s Suffolk Glass works. This photo is dated December 3, 1862. He was drafted in August 1863, at the age of twenty-six, into the 16th Massachusetts Infantry, which had suffered heavy losses at Chancellorsville and Gettysburg. Regimental records indicate that he deserted on October 21, 1863 near the end of the Bristoe Campaign near Greenwich, Virginia in the Manassas Valley.

After the War, Jenkins lived with his parents in Boston and worked in the shoe industry. He apparently made his fortune in the late 1880s when he acquired a patent for a boot and shoe nailing machine. He was married in Boston in 1893, at the age of fifty-five, to twenty-five year old Ruth M. Baker.

After Jenkins’ death in 1912, his widow and the couple’s children moved to the historic Captain Stephen Abbot House on Ballardvale Road in Andover. The family retained ownership through the twentieth century until the house was sold and moved to South Main Street.